Detailed Description: On a cold winter day in December of 2016, a fire started on a construction site located in one of the densest neighborhoods in Cambridge, MA. But a stone’s throw away from the booming hi-tech hub of Kendall Square, populated by major software and biotech companies, this close-knit neighborhood was comprised of tightly packed three wood-frame buildings.

The most common building type is a wood-framed three-decker, which has three floors. The plan of the triple-decker is very efficient and easy to build, thus making it a favorite of neighborhoods around Boston. Typically, no more than five to ten feet separate triple-deckers at the side yard, creating very dangerous conditions when a fire starts. A fire in one unit can spread uncontrollably in a neighborhood such as it did that fateful December day.

In response to this challenge, PLA worked with an extended family that tragically impacted by the fire. Three families shared a triple-decker that was lost to the fire. PLA proposed ways in which a newly designed and constructed house could be better protected but also to be bet zero. Net Zero goals were achieved by using a fully insulated 12” deep wood stud assembly. In addition, solar roof panels are designed, serving both as energy generators but shading devices, so as to reduce heat gain.

Triple-Deckers are most vulnerable to exposure on the side yard conditions, where windows face adjacent structures sometimes as close as five to ten feet away.

The party wall facing surfaces would be covered in a vertical “green” (non-combustible) wall of vegetation, which also helps to insulate and cool interior spaces. The vertical green walls would be watered regularly by an integrated gravity-fed drip system.

The windows facing the side yard use a fire-activated panel system that completely seals all window openings on a side yard wall. In addition, water or fire-retardant fluids are released from a cornice mounted tank, soaking the sidewalls and its plantings (vertical garden). 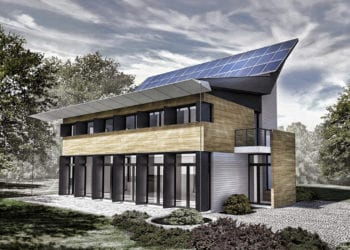 Texas Temporary House And Airstream Garage
A temporary house of many uses, including an Airstream trailer shelter
arrow_downward